This morning brought yet another story of identity theft (ID Theft in three steps: 'Adequate' Telstra and telco identity checks questioned) by the all-too-easy technique of finding an individual's name, home address and date of birth. These are all things that are on the public record and quite easy to discover; they should not be used as an authenticator. The US has a related problem with Social Security numbers which should also be regarded as an identifier, not an authenticator.

One of the most important steps in identity theft is getting access to the victim's email account. This is because the attacker does not know the password for the victim's bank, PayPal, eBay or other accounts, but the most common technique for password reset is to email a link to the user. In other words, the email account is used as yet another authenticator in a chain of trust. This means that email account mismanagement poses an extreme risk for user - it is both highly likely to be targeted, and also leads to severe consequences if compromised.

The weak link in all of this is the use of passwords; human beings being human and of bounded rationality, we tend to choose bad passwords that are easily guessable or discoverable. Even worse, we reuse passwords - confronted with the need to memorise the passwords for 20 or 30 different accounts, we understandably fail. Not everybody knows about password safes, for example. Inevitably, however, one of the sites we use gets compromised, the password hashes are stolen and posted on pastebin, and within minutes, a Rainbow Tables attack (or even quite mundane dictionary attack) reveals that favourite password, along with the email address, to the Bad Guy. And if the same password was used for the email account, it's Game Over.

I long ago determined that my email account had to use a unique and painfully complex passphrase, since the security of so many other assets depended upon it. It might be a pain in the ass to pause for a while as I hunt and peck my way through a long near-random string, but it's the price I pay for peace of mind.

And a few years ago, I decided that it was time to move to two-factor authentication for my email account. I'd had enough of running my own email servers and moved my email, etc. to Google Apps for Work, and Google was starting to offer two-factor authentication. I'm not a starry-eyed believer in 2FA - in many cases, there are better alternatives and a more sophisticated risk-based approach to the problem should reveal them - but to rely purely on passwords for such an important application is inviting disaster.

Enabling two-factor authentication is a fairly straightforward process, and Google nicely provides several alternative approaches. The most obvious is to rely on a mobile phone number and send an SMS (or voice message) to it - what banking systems call a mobile Transaction Authentication Number (mTAN). But that won't always work for me - some places I work are screened so that a mobile phone signal can't reach them. Once nice alternative is a Security Key - a small device that plugs into a USB port and provides cryptographic authentication; this will work with any software that supports the FIDO (Fast Identity Online) U2F (Universal 2nd Factor) specification, such as Chrome (but not Firefox, unfortunately). And there's the Google Authenticator, a smartphone and tablet app (technically, a soft token) which generates a unique six-digit number each minute. Any of these can be combined with the passphrase to allow a successful login.


This will overcome what I suspect is the biggest obstacle for many people contemplating the switch to two-factor authentication for Gmail, etc. - the fear that they will be locked out of their account if they lose their phone or another device or simply don't have it to hand. With a little extra setup, there's always an alternative available.

Setting up two-factor authentication is done by going to https://myaccount.google.com/security/signinoptions/two-step-verification or just clicking on your avatar at top right of a Gmail or other Google page, then choosing "My Account", then under "Sign-in & security", selecting "Signing in to Google" and on that page, under "Password & sign-in method" clicking on "2-step Verification". Unsurprisingly, you'll be prompted for your login ID and password before getting access to this page.

Security keys, such as the Yubikey, are inexpensive and widely available - I got mine from Amazon. Adding the security key to a Google account is very easy - on the 2-step Verification page, just click on "ADD SECURITY KEY"and you will prompted to insert your key and tap on its button if required. A second or two later, it will have been recognised and added to your account.

Setting up Google Authenticator is almost as easy. The 2-step Verification page prompts you to install the app (versions are available for both iPhone and Android) and then tap "Set up account". This will allow you to scan a QR code which presumably seeds the pseudo-random number generator in the Authenticator app. And that's it - from this time on, opening the Authenticator app displays a six-digit number, changing every minute, which you can use to authenticate to Google.

Google selects the second factor in a priority order - first (default) choice for me is the security key, then comes the Google Authenticator app, and only if those aren't available does it fall back on SMS authentication codes.

As mentioned above, setting up 2-step verification effectively logs you out on other devices and sessions, so you'll need to log in again. Your phone may pop up a dialog requesting an authentication code, especially if you have the Google Device Policy app installed for remote management. In my case, I tapped the button requesting Google to send an authentication code, and a second later the SMS arrived - but after I'd viewed the SMS and written down the code, I couldn't get back to the authorization dialog. Since the phone is still logged in and hasn't skipped a beat, I can only presume that the Device Policy app was able to directly read the SMS and didn't need me to manually enter the code.

When I booted my Chromebook and logged in, it initially accepted just the password but then gave me a notification message that said I should log out and in again. This time, it prompted me to insert my security key and tap its button, after which I was logged in.

Chrome on Windows can be a bit confusing, because it requires a log in to the browser itself, independently of any web sites you may log in to (this is because Chrome syncs your bookmarks and other data to your Google account). So you may get a couple of prompts to authenticate when you first launch Chrome and log in to a Google page such as Gmail.

Firefox does not yet support security keys - there's a Bugzilla page where you can track development progress at https://bugzilla.mozilla.org/show_bug.cgi?id=1065729. However, you can use Google Authenticator to log in to Google, as shown: 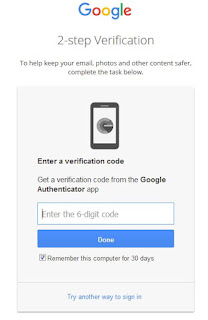 Thunderbird shares code with Firefox and also does not support security keys. In fact, if you've been relying on "Normal password" authentication for IMAP access to your Gmail account, it's now time to change. Right-click on your account in Thunderbird and choose "Settings", then click on "Server Settings" and change the "Authentication method" to OAuth2. Click on "OK", and then click on "Get messages" to force authentication. You'll get a password prompt and then a dialog like the one above, allowing you to authenticate using Google Authenticator or an SMS code. Once that's done, Thunderbird will be happy for the foreseeable future. If you're using the Provider for Google Calendar plugin, that should also prompt for re-authentication.

One of the beauties of adopting this technology is that it can eliminate the need for passwords for other web sites and applications. The OAuth2 protocol referred to above allows Google to function as an identity provider for other relying web sites - part of an underlying technology called federated identity management. I use this as part of my own systems - for example, I no longer use a password when logging in to my own web site, but instead have configured the content management system (in this case, Moodle) to use OAuth2 to get Google to confirm my identity. Not only can the site be more confident this really is me - I've used two-factor authentication to prove it - but I don't have to type in a password.

Many other sites also use two-factor authentication or federated identity management; for example DropBox now supports security keys, as does Github, Salesforce and many other sites. You can set up Facebook to use Google Authenticator by going to your settings, then choosing "Security", then clicking on "Code Generator" and clicking on "Set up another way to get security codes" and scanning the resultant QR code. The Facebook app on your phone can also be used as a generator.

You can log in to The Guardian, O'Reilly Media and many other sites using federated identity management with Google, Facebook, LinkedIn or Twitter acting as identity providers. Of course, social media networks are keen to have you use them as identity providers since then they can track you across other sites, although they have other ways of doing that anyway. However, as a Google Apps user I am a Google customer, rather than a consumer of free services, so I prefer to use only my Google ID for authentication.

Email accounts are too valuable to protect with only a password, especially a weak or reused password. Two-factor authentication providers better security and lowers the risk of identity theft. It takes only a few minutes to set up and rarely inconvenient thereafter. Use it.